How to choose aftermarket wheels? 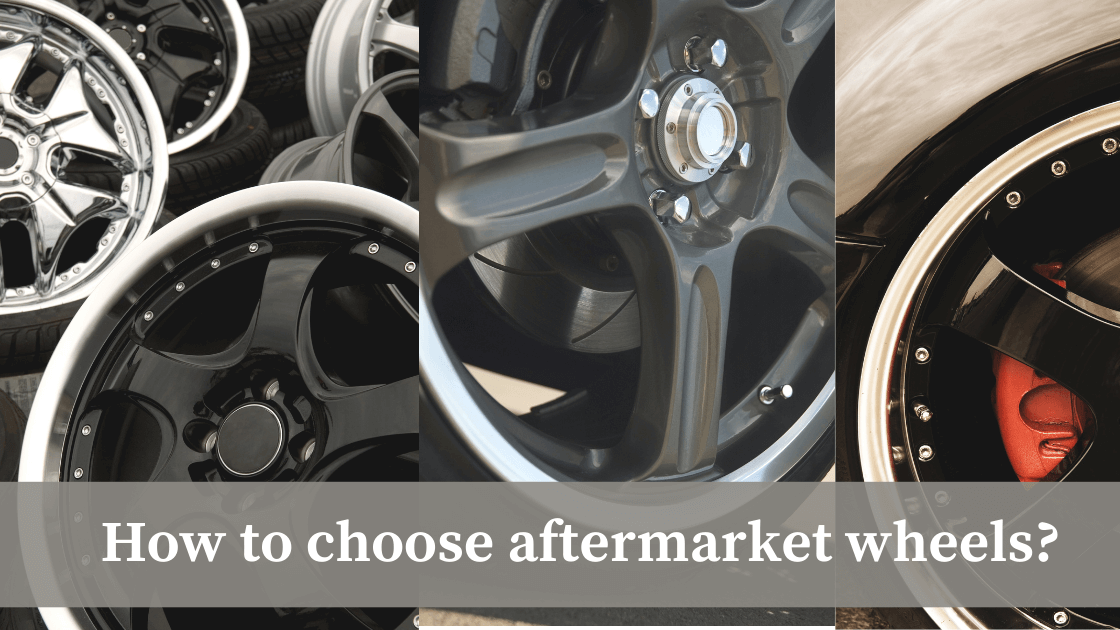 A company that has no affiliation with the carmaker manufactures aftermarket wheels. In addition, the style doesn’t attempt to reproduce the original. The appearance of most aftermarkets differs significantly from the original.

As per Astute Analytica’s report, the global aftermarket tire market is forecast to grow at a CAGR of 2% during the forecast period from 2021-2027. A major factor contributing to the overall rise of the aftermarket tire industry is the rapid growth of the automobile industry.

Wheels help us get around, keep us moving, and they can also serve as status symbols for some. Wheels are simply metal hoops that hold tires. In addition, it affects a car’s handling, comfort, and safety as much as the rubber that wraps around it. Those thinking of upgrading their car or changing the wheels should keep a few things in mind before making these changes.

Choosing aftermarket wheels can be confusing due to the wide variety of makers, models, and specifications. So, customers have a lot of choices, but beware of cheap wheels found online. Fitting cheap wheels is extremely risky, as they often do not meet Australian standards for aftermarket parts (known as Australian Design Rules, or ADRs). The wheels of these imitations might look similar to those made by reputable brands. In addition, the wheels don’t undergo quality and strength tests, which is crucial since they will be subject to a lot of abuse. For example car accessories which are of low quality and no certification can cause harm to the car.

There are strict standards and laws for such items. In many respects, the Australian Consumer Law and Australian Standards are very similar to the laws in Europe (TUV) and Japan (JWL), which produce almost all automobile wheels. For example, the official Australian distributors of name-brand wheels almost always sell quality wheels. Additionally, consumers can search Google for the official sellers of the wheels they want. In order to get the right, standards-approved name-brand wheels, it is best to buy from a licensed distributor.

Keep an eye on diameter

A car’s wheels and tires are primarily responsible for the vehicle’s ride and handling characteristics. In addition, many don’t think that these changes can affect the odometer and speedometer if performed incorrectly. It is known as rolling diameter. In addition, it refers to the distance traveled by the wheel and tire in one rotation. Many speedometers and odometers measure distance and speed using the rotation of the wheels. The dashboard shows the figures assuming that the tire’s circumference matches the tire producer’s specifications. Since a rotation at the transmission covers a longer distance with a tire’s larger circumference, the speedometer reading will be lower as the tire’s diameter increases.

Be careful about lugs

Trying on a wheel isn’t so easy. Wheel hub mounting points vary from manufacturer to manufacturer. Not only do some vehicles have five, four, or even three lugs, but the size of the studs varies from model to model. It is known as its stud pattern (or Pitch Circle Diameter, PCD).

Wheels and tires fitted to larger diameter wheels typically require a slight increase in width. According to car enthusiasts, the rule is “two plus one.” It means the consumer can only get one inch wider if they go up a maximum of two inches. In general, it is dangerous to stretch tires onto wheels that are too wide. In addition, the tires’ sidewalls act as load-bearing structures that align to 90 degrees to the wheels. Putting pressure on a tire pulls it out, sometimes to under 45 degrees. Additionally, it compromises structural strength and can cause a sudden blowout if the tire pops off.

Choose wisely when it comes to size

The main reason people buy aftermarket wheels is to give their car a sportier look and improve handling. Despite the fact that big wheels look good, remember the bigger the wheel, the larger the compromise for ride comfort and safety. Larger wheels and tires weigh more. Having a heavier suspension means a rougher ride and (in extreme cases) a situation in which the wheel follows road ruts, possibly causing people to lose control of the wheel. Be sure the wheels they’re considering are the same weight as the factory wheels. While a few kilos don’t sound like much, they have a huge impact on handling, so try to keep the weight as low as possible.

Be aware of the offset

Typically, offset refers to the distance between the wheel’s mounting hub and centerline. The face of the mounting hub sits behind the pivot point of the wheel. It sits “inside” the barrel, so the wheel has a negative offset. Alternatively, if it sits ahead of the centerline (meaning that the mounting hub is further from the edge of the car), the angle is positive. An offset range is known as ET (from the German Einpresstiefe, which means ‘insertion depth’). An increase in the ET number translates to a positive offset from the wheel’s centerline, and a decrease in the number signifies a negative offset. One thought on “How to choose aftermarket wheels?”